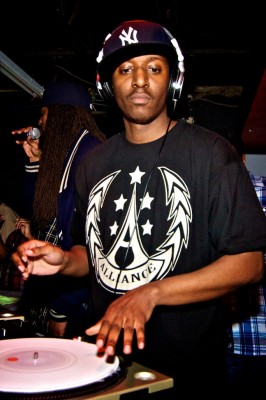 Jah Prince is an extremely active Jamaican personality in Atlanta who continues to network with artists, producers, event promoters and brands throughout the Caribbean. He is a monthly resident DJ at MJQ Concourse alongside DJ Rasta Root presenting ‘Face Off Fridays’, now in its 14th year.

Jah Prince has been a featured DJ during the annual ONEmusicFest and opened for Damian Marley at the Lakewood Amphitheater. Jah Prince was a volunteer spinning live every 3rd Friday on the Caribbean Runnings Show during the Global Drumbeat. The 2:00 – 4:00 pm slot is heard all over metro Atlanta using the 100,000 watts of community funded power on 89.3fm WRFG, Radio Free Georgia (wrfg.org).

As a media correspondent, Jah Prince has provided coverage for various global events like Welcome to Jamrock Reggae Cruise, Love and Harmony Cruise, Reggae 4 Japan, Rock The Bells, The Best of the Best Concert, Rebel Salute, and Reggae Sting (JA). In 2000 at the first Atlanta Caribbean Awards he won ‘Solo DJ of the Year’, in 2007 he was nominated ‘Best Reggae Mixtape DJ’ at the 11th Annual Justo Mixtape Awards and in 2010 won the award for ‘Best Radio Personality’ on DaFlavaRadio.com.

Jah Prince continues to dig deep into his musical roots when ‘Love Ultra Radio’. The show focuses on educating the audience on urban-pop talent. With a combination of smooth mixes and informative interviews from dynamic R&B artists like Dwele, Anthony David, Stacy Barthe, Rapsody, Noel Gourdin, and Zo!, the show promotes positive soul music. The Love Ultra Mix series serves as a complement to his radio show and illuminates the best segments on-air as ‘Mr. Love Ultra’ sets sail to travel.

Jah Prince hosts the ‘Sunsplash Mix Show’ with Selecta Princess every Saturday and spins an upbeat morning mix on DaFlavaRadio.com, Georgia’s most established online Caribbean radio station. He has interviewed over 200 guests ranging from Chronixx, Jah9, the Marley family, the bad boys of reggae Inner Circle and new icons like Jahmiel, Protoje, Konshens, Tifa and UK’s Gappy Ranks. Using this platform he continues to bring awareness to civic associations like the Atlanta Jamaican Association, Inc. and global initiatives of the Jamaica Tourist Board.

Currently sponsored by CY Clothing Inc., he is known on many continents as the ‘Cooyah Kid’ while mixing over 45 promotional CDs including the series ‘Island Vibes’, ‘Reggaelution’, and ‘CY Evolution’ thus boosting his global appeal. A trendsetter in the industry, his ‘podcast’ continues to garner significant attention since it’s 2008 launch, and the consistency of variety further solidifies his ranking in Atlanta. With the launch of his new website and upcoming mobile-app, the globe will now recognize the talents of this unique individual. As he says often: “I’m just a team player surrounded by winners… and I sincerely believe, no man is a failure who has friends, so I do this [music] to please my family and my friends.”